Greta Salóme is the winner of this years Söngvakeppnin final with the song Hear Them Calling, the English version of Raddirnar.
All songs were performed in Icelandic during the heats, but in the final the singers performed their song in the language as they would in Stockholm (if they won).
This resulted in a final with five songs in English and one in Icelandic in the final.
Hear Them Calling is written by Greta Salóme herself. She also wrote the song Á Ný, performed by Elisábeth Ormslev, the only Icelandic language song in the final.

It's the second time Greta Salóme (Greta Salóme Stefánsdóttir) is representing Iceland. In 2012 she performed Never Forget with Jónsi which ended 20th in the final in Baku.

Hear Them Calling is released as a digital single track (for example here), the Icelandic version can be found on the album below.
The twelve competing Söngvakeppnin songs have been released on CD (Icelandic versions), but this year there are no karaoke versions included.
A digital six-track release has all the finalists in their final versions, see tracklists and details below.
A digital single has the English version and karaoke versions (released March 8 through Hands Up Music)

First promo has the Eurovision version and karaoke 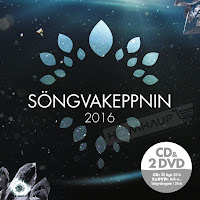 Söngvakeppnin í 30 ár
Iceland is celebrating 30 years of Eurovision this year.
A special edition of the yearly Söngvakeppni CD has been released.
It includes all the original Icelandic versions of the  entries of this years selection Söngvakeppnin Sjónvarpsins 2016 on the CD plus two DVDs with six episodes of "Árið Er".

The six shows feature the highlights of Icelands Eurovision selections.
More details (trackslist) below.
Then there's a 4-DVD box (pic right). I don't know the exact content of this set yet.
Icelandicmusic has three albums of audio tracks with live versions from 1986 to 2003.,

Links and sources
Special thanks to Jens
Greta Salomé FB
Shopping:
The DVD box at BeaRecords. and the CD/DVD
Heimkaup
Árið Er FB has links to the shows for viewing.
Listen to the songs at RÚV's Söngvakeppni pages 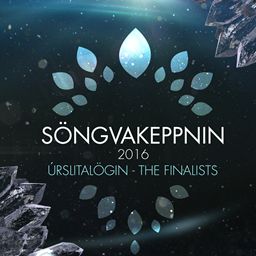 A digital release has the six finalists with five songs in English:

Posted by Eurocovers at 9:50 PM