Last years host country is represented in Stockholm by Zoë and her French language song Loin d'Ici (Far from here).
Loin d'Ici is written by Zoë Straub and Christof Straub. Christof is Zoë's paps, who himself is very successful as a member of Austrian folk duo Papermoon.

The song was first released October 2015 on Zoë's album Debut. The Eurovision version was released as a digital single on Februari 5. All releases through Global Rockstar.
Debut entered the Austrian album charts at its highest peak: No. 5. (Tracklist is below).

Zoë (Zoë Straub) entered last years Austrian selection with the song Quel Filou (What a cheat) which can also be found on the album Debut. Back then her song (out of six) didn't make the final two. The song spent one week on the Austrian charts.
Follow up single Mon Cœur A Trop Aimé spent 16 weeks on the top 75, reaching No. 12.

Debut Deluxe
Zoë's album Debut gets a re-release on April 29 as Debut Deluxe. It includes the ESC version of Loin d'Ici as well as the acoustic version and a remix (see versions below) plus some extra tracks (Full tracklist at the end of this post).
The original album version of Loin d'Ici is not on the new Deluxe edition
The CD will be released in Austria, Germany and Switzerland. (Global Rockstar / Sony Music 0889853261925)
Digital release will be worldwide.

The promo cds has the ESC version, karaoke and album version.
It comes in two different editions, one in card sleeve, the later one in jewel case (cd single case) with fold over and booklet.

A digital single was released in France on September 16. It features the radio edit, previously only released as video, the acoustic version and album track Devinez.

Follow up single Danse Avec Moi was issued as a promo in the U.K., this cd-r features the acoustic version of Loin d'ici. 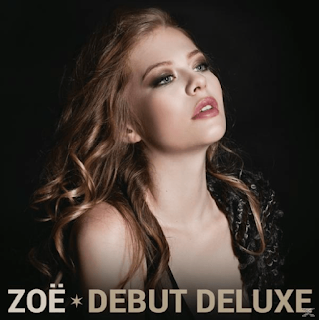